In the event of a fire, there must be safety measures in place to prevent the loss of lives, assets, and reputations. Read more to learn about the types of fire suppression systems and how they make an impact.

Despite the abundance of fire extinguishers and clearly marked exits, building managers need to take more measures to combat fire. Fire suppression systems are essential for fire safety because they enable early detection, speed up response to life-threatening incidents, and maximize the protection of people and property. Using different types of fire suppressants, like clean agent or carbon dioxide, fire suppression systems defeat the fire at the source and prevent it from spreading.

In this article, we’ll look at what are some of the reasons for installing fire detection, alarm and suppression systems. Let's explore this and how these systems work to keep buildings and occupants safe in case of an emergency.

What Is the Meaning of Fire Suppression?

Ultimately, fire suppression is a mitigation strategy that reduces damage and is a key role in fire safety.

What Is Meant by Fire Suppression System? 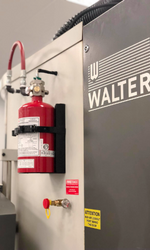 Many fire suppression systems also come with fire detection mechanisms, as well as signaling systems that alert occupants to the problem and direct them to take further suppression action.

In order to continuously check for heat or smoke, the active detection system typically requires an electrical power supply. Active detection is particularly efficient in recognizing fire and activating an automatic fire suppression system. The disadvantage of active detection is that if the power goes out, the system's capacity to detect fire also goes off.

Non-electric systems, such as our Firetrace systems, don’t rely on electricity to operate or detect a fire. The protected area has Firetrace Detection Tubing installed around the protected area. The detection tube bursts when it comes into contact with the heat from a fire. This releases the suppression agent, extinguishing the fire promptly.

A direct release system releases the fire suppressant chemical directly on the fire through the burst Firetrace Detection Tubing. The delivery of the suppression agent is automatic and requires no manual input. With the indirect release technique, the suppression agent is discharged through the discharge nozzles, flooding the protected area to rapidly and effectively put out the fire. Indirect releases have the ability to also be manually activated systems, but are fully automatic too.

An engineered fire suppression system uses clean agents to fill an entire space. Engineered systems are ideal for businesses or industrial buildings with vital electronic equipment that would be badly harmed by a sprinkler system utilizing water. 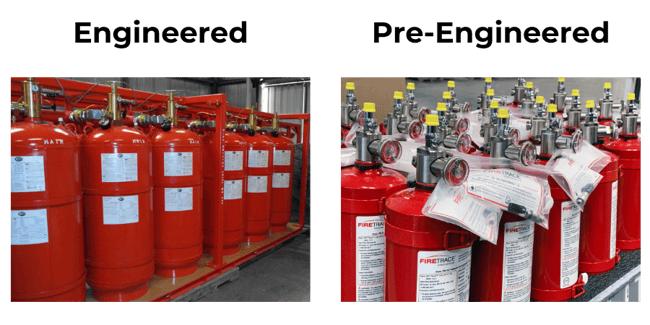 What Is the Difference Between Fire Protection and Fire Suppression?

Fire protection systems are made to prevent or slow down the spread of fires to enable the safe evacuation of occupants, while fire suppression systems are designed to suppress and extinguish fires after they begin. There are many different kinds of fire suppression and types of fire protection systems in buildings, each of which approaches slowing the spread or extinguishing a fire using different materials and methods. 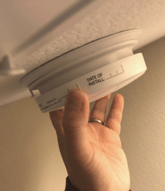 Passive fire protection uses building components, flooring, fabrics, and other materials to stop the spread of a fire.

Fire suppression technology is built to suppress and extinguish fires at the source.

What Are the Types of Fire Suppression Agents?

The types of fire suppression systems include clean agent, chemical clean agents, inert gases, CO2, and water-based systems. Each type of suppression can be used in different situations, like a warehouse or commercial kitchen, depending on the needs and location of a business. Some systems are better suited for businesses with sensitive electronics, while others work best with hazardous materials.

Below is a list of fire suppression system examples to explain each type further: 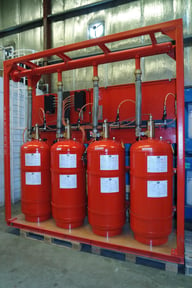 Class A, B, and C fires are rapidly extinguished using clean agent suppression systems, which employ chemical agents or inert gas that dissipates without leaving a residue. Clean agent fire suppression systems' extinguishing agents are safe for both people and the environment. These unique hazard systems have a short to no atmospheric lifespan and are safe to deploy in populated locations.

Nitrogen, helium, and argon are inert gasses that are effective fire suppressants. They can extinguish flames by suffocating, displacing, or decreasing oxygen levels within an enclosure.

Wet chemical fire suppression systems effectively put out flames in commercial kitchens. The liquid spray instantly reacts with the fats and oils on a burning surface to produce foam that cools the area and prevents a fire from reigniting. After activation, the affected area is easier to clean than dry chemicals.

Dry chemical suppression systems use dry chemical powder to put out fires instead of inert gas or chemical clean agents. These dry chemicals are typically sodium bicarbonate or mono-ammonium phosphate. Oftentimes, the cleanup can be time-consuming and expensive

Carbon dioxide (CO2) suppression systems are used to quickly put out a variety of Class A, B, and C fires. Systems for high-pressure and low-pressure CO2 suppression may cover everything from large, open spaces to a single piece of equipment. Due to CO2's lack of color, odor, and electrical conductivity, there is little to no cleanup required after activation. There’s also no chemical residue that can harm delicate equipment. CO2 suppression systems are typically used in areas where few employees are stationed.

A water-based fire suppression system uses a pipe networks to distribute water to connected fire sprinkler bulbs. In some situations, a water-based suppression system is not the best option. With certain types of fires—like gas and oil fires—water may occasionally be more hazardous than other extinguishing agents. This is because water can aggravate a fire with certain types of fuel. Water-based systems may also seriously harm your equipment or property if it is sensitive to liquid contamination.

What Is the Most Common Fire Suppression System?

The most common fire suppression system is a water-based sprinkler system. This may be partly due to the fact that many building fire protection systems were established before more sophisticated fire suppression technology was accessible. In addition, depending on location, there may be rules and regulations that require water sprinkler systems to be installed in buildings. Another determining factor is the price and availability of water as a resource. Because water is typically inexpensive and abundant, it has been more accessible for businesses in the past. 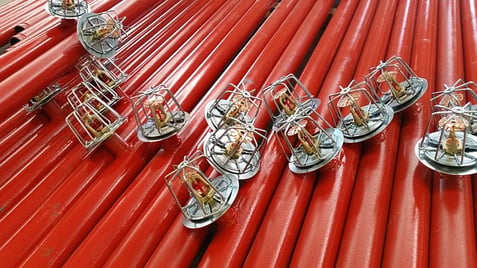 Some common types of water-based sprinkler systems include:

1. Traditional wet pipe sprinkler systems fill the sprinkler pipes with pressurized water that is immediately released from the sprinkler heads when a fire happens.

However, traditional sprinkler systems are prone to freezing, because water is always in the pipes, leading to possible leaks and other piping and waterflow problems.


However, just because water-based systems are the most prevalent does not imply that they are ideal for all environments.

How Many Components Are in the Fire Suppression System?

Six key components make up a fire suppression system. These components include: 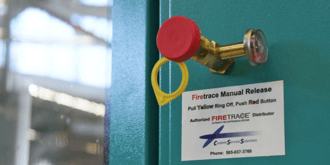 While some systems are designed to operate automatically, others need manual activation from someone within the building. A direct system is initiated using heat-sensitive tubing that automatically releases a suppression agent once it reaches a certain temperature. An indirect system can be both automatic and manual, depending on the type of suppression being used.

Fire notification devices alert the occupants of a building that there is a fire within the building. These typically include alarms, bells, horns, or other sounds and strobe lights. When these go off, always look for illuminated exit signs and pathways to evacuate safely.

Alarm monitoring systems are designed to automatically alert fire departments and other authorities of a fire alarm trigger within a building. Because of the automation, occupants do not need to call the fire department while they are safely exiting the building. However, these systems are sometimes optional, and a building or security manager should know the correct procedures in the event of an emergency.

Alarm control panels give authorities and emergency response teams the ability to shut off the fire alarm system once a fire has been extinguished and the building is determined to be safe. Some alarm control panels include monitoring systems that detect a fire, alert emergency personnel, and set off notification devices. 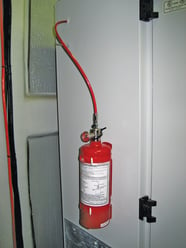 Suppressant delivery systems are the functional part of fire suppression systems. This includes:

Active fire suppression systems are connected to the electrical infrastructure of a building, which is provided by electric service providers. In those systems, it is essential to have a backup power supply, like batteries, to ensure the system runs in case of a power outage. Non-electric suppression systems do not require primary or backup power to operate effectively.

With fire suppression system installation, it is important to be familiar with the different components and any necessary actions that might be required to make it operate as intended. Each piece of equipment has an important role in fire suppression that is essential to maintaining the safety of the building and its occupants.

Why Do You Need a Fire Suppression System? 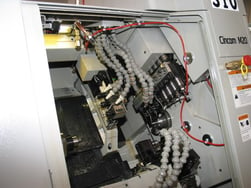 At Firetrace, we protect lives and livelihoods from the impact of fire. Our systems keep business, people, and equipment safe. With automatic detection, our systems  suppress fires in high-risk equipment, like CNC machines, vehicles, heavy equipment, electrical cabinets, and wind turbines.

Keep in mind, electronic fire detectors are not necessary with comprehensive systems. Instead, Firetrace systems use tubing that has been carefully developed to detect flames. The tubing is strategically routed throughout the enclosure to burst where hazards are likely to occur. Once the tubing bursts, there is a change in system pressure, which opens a valve, releasing any gas or powder that has been kept in the cylinder. Because of this, these systems do not require manual operation. However, some systems can be manually operated by pushing a button called the manual release when necessary.