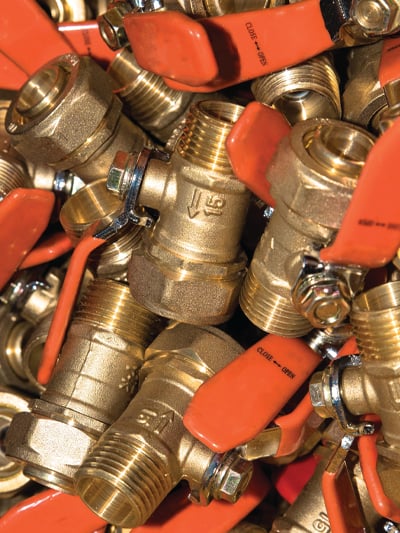 An Indiana manufacturer of brass ball valves for industry, home, and heavy equipment applications is no stranger to fire risks present in their coring manufacturing process. The coring process produces excess metal parts that fall into a catch basin. In many cases, the bar ends are still hot, which can ignite the other chips in the catch basin and start a fire.

Before installing Firetrace automatic fire suppression systems, the company relied heavily on fire extinguishers and their operators to manually suppress the fires that occur in the catch basins. However, if the operator turned their back, walked away, or couldn’t react quickly enough, a fire could rapidly grow out of control.

The most recent incident occurred as an operator was working at a nearby coring machine, and a hot piece of brass fell into the catch basin. A fire ignited and was suppressed in seconds by the Firetrace system before the operator had time to react.

After the system went off, the machine underwent a full inspection. A few sensors and wires needed replacement because they had slightly melted due to the heat. Once the parts were replaced, a technician swapped out the fire suppression cylinder with a spare cylinder. Because they had an extra cylinder on hand, the technician was able to re-commission the system to get the machine back up and running. Overall, there was less than four hours of downtime. The company then reached out to their local distributor to replace the spare cylinder to ensure they have one on hand at all times to minimize downtime when another fire occurs.

The company has only had Firetrace systems installed for about a year, and the systems have been used three times so far. They understood that the nature of their machining process carries substantial fire risk, so they decided to be proactive in mitigating the hazard.

After installing the automatic fire suppression systems, they decreased downtime by 25 percent after a fire incident in comparison to when they were using portable fire extinguishers. Protecting their equipment with automatic fire suppression gives the manufacturer more up-time for production. It also ensures protection and peace of mind for everyone in the shop, regardless of whether or not someone is monitoring the machines.

“Firetrace has worked perfectly for us because you can control the fire before it gets too big, regardless of if anyone is around. It’s doing its job. The fires are put out right away.”
- Maintenance Lead

Through assessing their fire risk and taking action to protect against the fire hazards, this company has avoided injury, machine loss, and costly downtime by installing automatic fire suppression systems. They have also put a system in place by having spares on hand to ensure they can be up and running as soon as possible after a fire incident.

Whether it's a CNC machine, electrical panel, or vehicle, we are ready to tackle your special hazard application. Let's talk.