Automatically Detect and Suppress Fire Directly at the Source

What is a Fire Suppression System?

While sprinkler systems are the most common type of fire suppression system, some applications require special hazard fire suppression systems that do not use water. These systems are unique in that they can deal with hazards where water could actually do more harm than good. Within fire science, there are several classes of fires: class A, B, C, D, and K. The fuel of the fire will dictate what can put it out. Class A fires, for example, involve wood, and a sprinkler system would work well. A Class C fire, on the other hand, is an electrical fire and that may get worse by trying to suppress it with water. In summary, the specific environment will determine which system will work best.

Pre-engineered systems are used to protect small compartments or micro-environments. Engine compartments and electrical panels are good examples of where these types of systems would provide protection. They are also useful for suppressing fires in CNC and EDM machines. Fire suppression agents: Within pre-engineered fire suppression systems, there is a slew of agents that can be used. Class K systems typically have foam fire suppressants or other wet chemical agent options to help reduce the spread of the fire within the space. Engines, by contrast, are typically protected using ABC Dry Chemical powder, which can effectively suppress Class A, B, and C fires.

Non-electric detection systems, including the Firetrace pre-engineered system, utilize pneumatic detection tubing that can be installed inside and throughout hazards. Since heat rises, it works to trigger the pneumatic detection tube. If the heat or fire comes in contact with the tube, the tubing will burst open at the point of contact. It causes a pressure change in the entire system and will tell the system to discharge its fire suppression agents. Agents you can use with these systems include carbon dioxide, dry chemicals, clean agents and foam suppressants.

How it works: In a direct release system, the suppressant will come through the hole in the tube directly.

How it works: An indirect release is when the tube acts as a detection device and, through the pressure change, tells the system to discharge the agent through other pipes and nozzles.

Core Technology in the Tubing System

The Firetrace tubing system, with its focus on pressure and heat, is incredibly simple. This core piece of technology works in a reactive manner and can jump into action as soon as a fire is detected. The agents in use with the products will vary, but Firetrace offers branded clean agents only. Clean agents do not involve any clean-up work after discharge. Two main manufacturers of clean agents are Chemours and 3M.

The red Firetrace Detection Tubing (FDT) is at the heart of the system. By routing the tubing throughout a special hazard, the system can detect a fire at its source. Under normal circumstances, the FDT detects a fire 10 times faster than traditional methods. Firetrace direct release and indirect release systems do not require electricity to operate and accurately detect fires even in the presence of dust, particulates, and other environmental challenges.

Firetrace offers a range of suppression chemicals (agents), and our experts can identify the best agent for your application. We have strong partnerships with clean agent manufacturers, allowing us to offer both Chemours FM-200 or 3M Novec 1230 clean agents. We also offer ABC dry chemical, BC dry chemical, and carbon dioxide suppression systems.

There are several costs to consider with fire suppression systems, and prices can vary widely. The most obvious are the actual equipment costs, including the cost of the suppression agents. Often overlooked are the installation costs. Purchasing the system also means you need to have it installed and this can bump up the price. You may want to compare the price of an automatic fire suppression system to something simpler that may be able to do the job just as well, such as a fire extinguisher system. 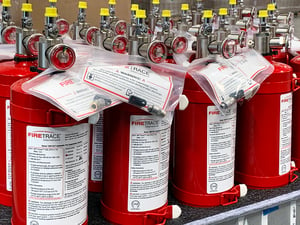 A fire suppression system will typically cost in the thousands of dollars, while a fire extinguisher at a retail store is under $20. The downside of a fire extinguisher is that it will take a person physically sitting there, detecting the flammable, combustible element, and having to extinguish it in a high-pressure situation. In this case, you also have to consider the cost to human safety and peace of mind. With a fire suppression system, you do not need to worry if your manufacturing plant is still operating overnight with no one in its presence. The system will handle it automatically.

Automatic fire protection systems are popular choices for all types of buildings.  They are pre-action against hazards. Firetrace systems work to detect and suppress fires as soon as they begin. The work they do, without any human intervention, can be the difference between the fire doing minimal, or extensive damage.