Citizen A20 Saved by a Firetrace Fire Suppression System 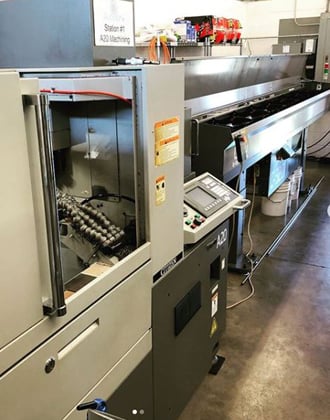 Rudolph, LLC (East Earl, PA) is a precision machine shop specializing in small and micro components, mainly for the medical industry. Bruce and Dan Rudolph, a father and son team, started the company ten years ago with a single Citizen machine. Rudolph found their niche in micro component machining after being asked by a customer if they could do small work. With some trial and error, they perfected the process and have expanded the business to running eight machines.  The parts Rudolph mainly machine are made from titanium and stainless steel on Citizen A20, R04, and L12 machines, all of which use oil-based coolant.

Fire Incident and Save

The fire incident occurred on the Citizen A20 while running a titanium part they have been machining for five years. On a July morning, Dan was running a few machines when he noticed something looked different with the machine, and not in a good way. Smoke appeared to be coming out of the machine, but it was, in fact, the clean agent that suppressed the fire. Before Dan had time to process what was going on, he immediately acted by hitting the manual release for the fire suppression system.

“I never saw any flames. The Firetrace system activated before I recognized what was going on. I wasn't very far from the machine, maybe five feet away.”

The machining of this particular part includes a fair amount of drilling before the high-pressure coolant kicks in while finishing the boring of the part. Dan believes the fire ignited by a spark from a hot chip coming into contact with the oil mist. Once the fire started, the system immediately activated to release the clean agent to suppress the fire. Following the incident, they inspected the machine and found that nothing was burned, and there was no damage to the machine.

If the machine did not have the Firetrace fire suppression system, Dan mentioned the shop does have several fire extinguishers on hand. Because he was near the machine, he could have manually fought the fire. While manually fighting the fire would not have resulted in a catastrophic loss, the machine would have incurred significant damage, and the entire incident would have been a little more traumatic.

In the event the machine was running unattended, which they do routinely, the outcome could have been devastating, including losing the machine, downtime, and possibly the entire shop. The chart breaks down the potential costs associated with scenarios of having an unprotected machine.

Fire suppression systems are big investments for small shops like ours, but after seeing what the system can do and with running unattended, it's critical for any machine we buy from now on to have it. The system is just a functioning part of the machine that is critical to operations.

Rudolph recently switched their fire protection provider and did experience a little delay in the replacement of the Firetrace tubing and recharge of the cylinder. This, however, did give them the time to do some maintenance on the machine. They also put a plan in place to have tubing and an extra cylinder on hand in the event of another fire to get back up and running in minimal time.

As Rudolph continues to expand their operations, they anticipate adding more machines. Any machines they purchase running oil-based coolants will have a Firetrace system installed to protect them, their shop, and their livelihood.

Rudolph avoided the loss of their Citizen A20 machine and avoided costly downtime, repairs, and injury with an automatic fire suppression system. This case study shows how Firetrace systems can help save valuable time, money, and improve safety in machining businesses.

Whether it's a CNC machine, electrical panel, or vehicle, we are ready to tackle your special hazard application. Let's talk.