Motor Control Center (MCC) is an assembly to control some or all electric motors in a central location. It consists of multiple enclosed sections having a common power bus and with each section containing a combination starter, which in turn consists of a motor starter, fuses or circuit breaker, and power disconnect. A motor control center can also include push buttons, indicator lights, variable-frequency drives, programmable logic controllers, and metering equipment.

Programmable Logic Controllers (PLC) is an industrial digital computer which has been ruggedized and adapted for the control of manufacturing processes. This includes assembly lines, robotic devices,  or any activity that requires high-reliability control and ease of programming and process fault diagnosis.

Switchgears are the combination of electrical disconnect switches, fuses, or circuit breakers used to control, protect, and isolate electrical equipment. Switchgears are used to both de-energize equipment to allow work to be done and to clear faults downstream.

Power Distribution Unit (PDU) is a device fitted with multiple outputs designed to distribute electric power, especially to racks of computers and networking equipment located within a data center. 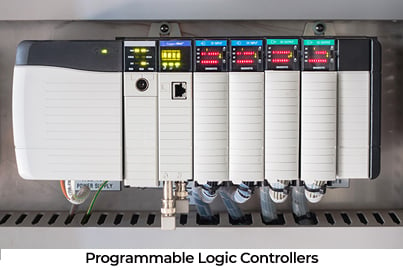 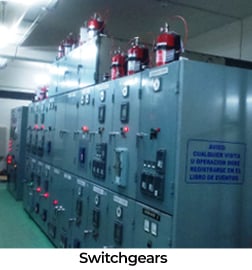 While there are several other types of electrical panels, this gives you the basics of what electrical panels look like and their functions. Some form of electrical panels can be found in virtually every industrial or commercial space. Should a fire occur in one of these panels, it would typically destroy the contents. If a fire is left unchecked, it could spread to the room or even the building.

Some of the most common causes of fire in electrical panels include:

What is the best electrical panel fire protection system?

Electrical panels are critical to the operations of businesses all over the world. If an electrical panel goes down, it can be detrimental for the business, its operations, and its reputation. An automatic fire suppression system not only protects valuable equipment against loss, but it also reduces downtime of critical business operations. By containing the fire to the individual panel or enclosure damage is limited to that enclosure. The system operates by quickly detecting and suppressing the fire and prevents the spreading to other components or parts of the building that would require water sprinklers or firefighters to extinguish.

A minor investment in a fire suppression system will secure your critical and expensive electrical equipment and minimize operational downtime to save you and your business thousands to millions of dollars if when a fire does occur.