What Happens if a Solar Farm Catches Fire?

Though solar farm fires are rare, they are not impossible. Any high-power electrical equipment, including a solar power plant, presents a risk for fire. The good news is that solar farm fire protection has quickly evolved along with the solar industry. Let’s talk more about what happens in the worst-case scenario when a fire does break out at a solar farm.

What Happens if a Solar Panel Catches On Fire?

When a fire starts at a solar farm, it rarely begins with the solar panel itself. The cables and connectors going into the panel, though, are a common place that fires start. Fires at a solar farm can also start within the DC combiner boxes or inverters, which manage and convert the electricity. There are four main parts that make up a solar farm:

The inverters, DC combiner boxers, connectors, and cables are the most common places where solar farm fires start. Electrical shorts, flying sparks, and extreme heat buildup inside the equipment are some of the leading causes. This is why regular maintenance and code inspections are so essential.

What Happens to Solar Panels in a Fire?

Just because solar fires rarely occur does not mean the panels are fireproof. During a fire, they will not only be damaged, but can also cause more damage.

If there is still light in the environment, a solar panel will continue to generate DC current until a system failure or other intervention. The risk of a live electrical current plays a major role in firefighter safety and emergency response for solar power systems. Firefighters and first responders must control the blaze without increasing their risk of electrocution. This can be especially complicated with DC current, which is more unpredictable and difficult to detect than AC power. When automatic fire suppression systems are installed in high-risk areas like the inverter, the can detect and suppress a fire before the fire can spread. The systems can also provide notification when the system is activated and shut down and disconnect of the inverter.

What Happens if a Solar Farm Catches On Fire?

When a solar farm catches fire, what happens next depends on a number of variables, including the presence or absence of a fire suppression system. With a fire suppression system in place, the fire is likely to be contained within the electrical cabinet or inverter enclosure at the point of system failure. The fire suppression systems release an agent that suppresses the fire without damaging the electronics and leaves no residue. Without such a system, the fire can spread within the inverter or to other equipment and the surrounding environment. This not only increases the risk to life and safety, but also impacts the bottom line. The more solar and electrical equipment damaged in the fire, the more expensive it is to replace and the longer the solar farm will be offline. In worst-case scenarios, the entire area might suffer power shortages or environmental hazards due to large-scale solar farm fires. 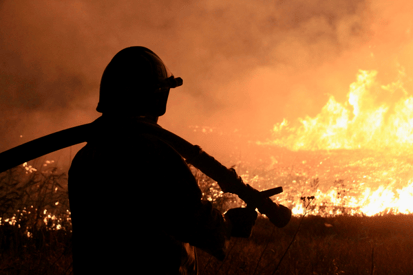 Though solar farm fires are not common, it only takes one incident to cause devastating consequences for life, safety, the community, and the bottom line of a business. The solar industry has learned enough about fire risks to take strategic, targeted action through fire mitigation.