Can Solar Farms Cause Fires?

As global warming rises, many communities turn to solar farms to combat the issue. Because solar farms do not have any harmful discharges, they do not contaminate the land, water, or air around them. This combined with how sustainable they are gives them an edge over fossil fuel usage for power generation. As more solar farms are created, though, you might wonder how safe these structures are. In fact, you may ask, "can solar farms catch on fire?"

Like with anything that conducts or transports electricity, they can. Although these fires don't happen often, they’re still a possibility. That’s why it’s important to understand solar farm fire protection to keep the farms and surrounding areas safe from destruction.

What Causes a Solar Fire?

There are several factors that can cause a solar farm to catch fire, many of which include damage to the equipment on the farm. They are:

There are many factors that can cause solar farm fires, but with regular maintenance checks and fire suppression systems, the chances of a fire occurring on your solar farm are significantly lower. When measuring solar farms pros and cons, the pros greatly outweigh the cons.

How Many Fires Have Been Caused by Solar Panels?

Solar panels themselves rarely ever cause a fire. Most fires on solar farms are caused by other pieces of equipment, such as electric cabinets and cables. Even then, solar farm fires are still rare. Solar farm fire statistics are not specifically tracked in the United States, however, one German study found that less than 1% of solar power systems catch fire. From what experts can tell, these numbers are comparable to those in the U.S. Compare that to the thousands of oil spills that happen every year in the U.S. alone, and solar farms still prove the safer energy source. 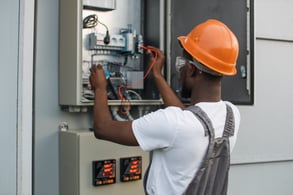 Even though it's not often that a solar farm catches on fire, it’s still important to take safety measures to help prevent them from spreading when they do occur. Properly maintaining and monitoring equipment is the first step. The next step is to routinely conduct Fire Risk Assessments and implement any necessary changes to reduce your solar farm fire risk. Interested in learning more? Check out our Solar Farm Fire Report or contact us for more information.