What are the Different Stages of a Fire?

Fires can be devastating and happen when you least expect them. Generally, the earlier you can suppress a fire, the better. This is because fires grow in intensity, temperature, and size if they have the resources they need to burn- oxygen, heat, fuel, and in some cases, a chain reaction. 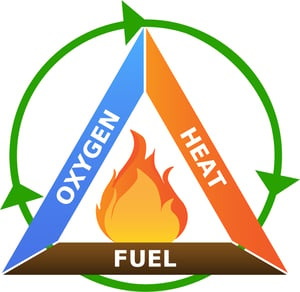 The NFPA and most other standards classify four stages of a fire.

Understanding how a fire forms can help you better protect yourself and your assets. Read on to learn more about how fires form — from the incipient stage until decay.

The incipient stage is when it’s crucial to fight a fire because it is easiest to suppress it at this point, and it will cause the least damage. It’s difficult to manually fight and extinguish a fire when it is in this stage because of the time it takes to identify the fire, locate a handheld extinguisher, and perform the proper steps to spray the fire. That’s why Firetrace’s detection tubing detects and suppresses fires automatically during this early stage. Fire suppression systems allow you to suppress the fire right after ignition without needing a person to be present.

Once a fire reaches this stage, it becomes harder to control. If a fire detector recognizes a fire at this point, you have little time to put it out before it reaches flashover.

NFPA 921 defines flashover as “a transitional phase in the development of a compartment fire in which surfaces exposed to thermal radiation reach its ignition temperature more or less simultaneously and fire spreads rapidly throughout the space resulting in full room involvement or total involvement of the compartment or enclosed area.”

This means there is a sudden ignition of everything combustible in a contained area. Temperatures can rise to 1,000 degrees Fahrenheit in just a few seconds. Humans are not likely to survive in a compartment that has a flashover.

The decay of a fire is the phase when the fire decreases in intensity until it is either a smolder or non-existent. If there was no suppression, this is likely when there is nothing left for the fire to burn.

It’s crucial that a fire suppression system detects a fire as early to the start as possible to prevent harm to people and equipment. This technology is almost always preferable because it can detect and suppress fires before anyone notices them and does not need anyone to be around. Think about how you would manually fight a fire in a CNC machine running overnight or a wind turbine operating 45 minutes away.