Solar is set to account for almost half of all new US electricity generation capacity this year and next year, with three states leading the way. As US solar capacity is set to overtake wind for the first time, solar operators must do everything possible to protect assets from fire.

Solar will account for around half (49%) – or 38.3 GW – of all US electricity generation capacity additions in 2022 and 2023, according to data from the US Energy Information Administration (EIA).

To put this in context, wind will account for only 14% of US capacity additions – totaling 11 GW – over the same period. The dramatic growth of solar capacity is demonstrated by utility-scale solar photovoltaics added more capacity (19 GW) to the grid than even natural gas (11 GW) since 2020. According to the EIA, that trend is expected to continue over the next two years. Indeed, the EIA estimates that solar and wind combined will add about three times more new generating capacity than natural gas in 2022 and 2023.

Which US States and Regions are Leading on Solar Deployment?

The US installed a total of 4.3 GW of photovoltaics in the first quarter of 2022, according to the National Renewable Energy Laboratory (NREL), which is part of the US Department of Energy’s Office of Energy Efficiency and Renewable Energy.

It was the US’ most successful quarter to date in terms of solar deployment and the Q1 2022 total was up 7% year-on-year. The three states leading in solar deployment are California (which accounted for 22% of the total), Florida (17%), and Texas (5%).

The contribution of other US regions was, according to NREL, as follows: 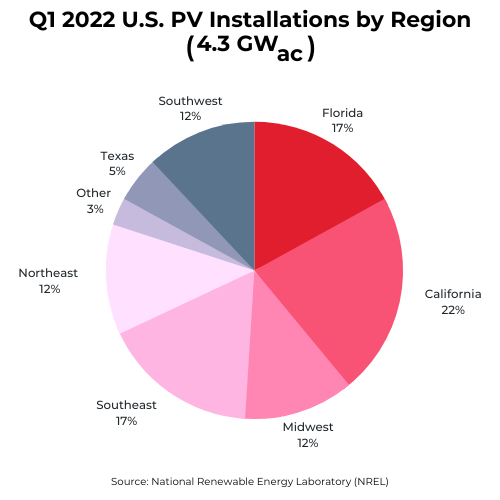 Why US Solar Deployment is Set to Overtake Wind

Meanwhile, the US Energy Information Administration expects that small-scale (that is, less than 1 MW) solar capacity will grow by 6 GWac in 2022 to reach a total of 39 GWac and will grow by an additional 7 GWac in 2023 to 46 GWac.

A new forecast issued by the Solar Energy Industries Association and Wood Mackenzie concluded that the Inflation Reduction Act (IRA) will help the US solar market grow 40% over baseline projections through 2027, equal to 62 GW of additional solar capacity.

The forecast said that the utility-scale sector will lead the solar industry’s growth over the next five years with 162 GW of new capacity. It added that cumulative US solar installations across all market segments will nearly triple in size, growing from 129 GW today to 336 GW by 2027.

Why Solar Fire Risk is Underestimated

With US solar deployment increasing so dramatically, it’s vital solar farm operators take extra steps to protect their assets. These include protecting your assets by implementing fire suppression systems and conducting fire risk assessments. Research has shown that solar fires are potentially being underestimated due to under-reporting and a lack of available data.

A study by the UK’s BRE National Solar Centre led to the finding that researchers “strongly suspect a degree of under-reporting, especially amongst solar farms and domestic thermal events that were resolved by a solar installer/maintenance engineer.”

There are four recommended actions that can be taken to minimize the fire risks at solar farms. A study completed by TÜV Rheinland, a European testing and certification company, which has been cited by the US Department of Energy’s Solar Energy Technologies Office, outlined the steps that can be taken to reduce solar fire risk. They include:

Another recommended action is installing fire suppression systems in components, such as inverters, that pose a higher risk of fire. Thank you for taking the initiative to learn more about fire safety— it is critical assess the level of fire risk at solar farms and understand what precautions and risk mitigation measures to implement.