Can Solar Panel Farm Investors, Operators, and Owners Afford Not to Protect Their Assets From Fire?

In the last two decades, the levelized cost of energy (LCOE) for solar has tumbled. Now, solar is one of the cheapest forms of energy. According to an analysis undertaken last year by an investment bank, Lazard, the LCOE of unsubsidized large-scale PV based on crystalline silicon is estimated at $0.030-$0.042/kWh and that of grid-parity thin-film solar plants at $0.028-$0.037/kWh. This puts solar on a similar footing to wind in terms of LCOE, but Lazard indicated that the cost decline for utility-scale solar continues to be higher than that for onshore wind.

Competition between clean energy sources is likely to drive LCOE down further in the coming years as the energy transition heats up from governments eager to demonstrate that they’re on the climate change counter-attack.

But with war in Europe, wrangling between China and the USA over solar panels, and soaring inflation brought about by massive post-pandemic supply and demand shortages mean there are significant obstacles for clean energy developers.

SEIA data states that solar farm installation costs are typically between $0.89 to $1.01 per watt, meaning that a 10 megawatt (MW) solar farm would cost between $8.9 and $10 million dollars to build. But the challenges mentioned are likely to increase up-front costs for projects, squeezing project profitability.

The Cost of Ignoring Fire Risk in Solar Developments

Mitigating risk is therefore critical to the success of any solar project. And fire risk, in particular, has the propensity to be very costly. Given the necessity for solar projects to be located in areas of high solar irradiance – that is the amount of light energy from the sun hitting a square meter of any given surface each second – if fire breaks out in the electrical cabinets of a solar farm, the potential for widespread damage is high. Companies can expect there to be damage to equipment, damage to the environment, and damage to reputation. Each of these things risks placing a huge, additional financial burden on project owners and developers already squeezed by soaring costs. 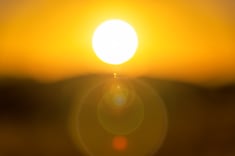 While fire incidents generally remain infrequent, a study commissioned by the UK government and published in 2018 found that solar fires are both under reported and on the rise. Data from the US Fire Administration showed a 36% increase in fires between 2017 and 2018.

Are Fire Suppression Systems the Answer?

Most photovoltaic system fires start in DC isolators, connectors, cables, and invertors, which are all components housed in the external containerized electrical cabinets of a solar farm. This means it is straightforward to mitigate the risk of fire at a project with the installation of suppression systems within these cabinets.

Drawing on experience in the wind industry, we are adapting direct-delivery tubing with cylinder and clean agent system out to solar farms. The technology has already been installed more than 23,000 times in wind turbines around the world.

These suppression systems protect clean energy assets, their electrical cabinets, and components from initial fires that can rapidly spread - ultimately preventing costly and irreparable damage, up to and including total loss. It is also recommended to conduct fire risk assessments as an added layer of prevention.

In an incredibly competitive renewables landscape, which is driving down the LCOE of solar energy, and as geopolitical issues the world-over increase project and maintenance costs, the question, really, is whether solar operators and developers can afford not to consider fire risk in operations strategies?