How to Extinguish a Solar Farm Fire

As is the case with any high-voltage equipment, equipment at solar farms can catch fire. Although solar farm fires are relatively rare, they are potentially devastating. Because of their disastrous nature, fires are the most pressing safety concern for solar farm development and operations.

So, what’s to be done? In order to create an effective solar farm fire protection framework, close attention must be paid to the development and utilization of safety protocols and preventive equipment. Unfortunately, this isn’t a widespread practice.

When it comes to fire safety at solar farms, operators often overlook fire mitigation strategies. Many choose to rely on insurance providers to cover losses in the event of a fire. However, deciding to omit fire preventive strategies is neither the most affordable, nor the safest option for solar farms.

To further illustrate this concept, let’s explore the following:

Why Are Solar Farms Catching Fire?

Additionally, solar equipment often reaches high temperatures because it is constantly moving, inverting, transforming, and manipulating high voltages—this increases fire risk as well. Ultimately, in any situation where high voltages are present, the risk of fire is escalated.

The Dangers of Photovoltaic Fires on Solar Farms

The presence of a live electrical current makes it difficult for firefighters and first responders to safely extinguish a solar farm fire without increasing the risk of electrocution. Because of these hazards, it often takes firefighters more time to assess and address the situation—which increases the potential for the fire to get out of control. 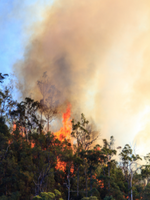 When solar farm fires are left unchecked, they pose a significant threat to their surrounding environment. For example, solar farm fires can be especially destructive if the area is experiencing dry conditions. Any fire has the potential to start a wildfire, even if the initial fire is relatively small. This is especially worrisome as wildfire incidents continue to increase due to the effects of climate change.

How to Put Out a Solar Panel Fire Quickly and Safely

As the popularity and development of renewable energy resources soars, great efforts have been made to continually improve the overall safety of solar farms and other renewables. This includes introducing fire prevention measures like fire risk assessments and utilizing fire suppression technology.

Conducting frequent and thorough FRAs helps solar farms to identify potential solar panel and electrical fire hazards early on. An FRA allows solar farm operations to efficiently gather and analyze their fire risk data to truly understand the impact a solar fire could have on their operations, personnel, and the surrounding environment. This allows the solar farm’s operations department to make better informed decisions when developing a solution to reduce solar panel farm fires and electrical hazards.

Performing an accurate FRA benefits solar farms in many ways, including:

Sadly, even if all proper precautions are taken, fires can still occur. However, understanding the risks, mitigation efforts, and implementing a fire safety plan puts solar farms on the right path to protect people and assets by minimizing damage and preventing tragedies.